While the piece I did yesterday isn't really in line with the rest of my work, I proved to myself a few things that I thought I'd share with you.

I'd never seen Pitch Perfect before I got the sketch, actually hadn't even heard of it.  I didn't know who Fat Amy was, was completely clueless as to what horizontal running was referencing.  So I do what I usually do when I have no idea what something is: I call my younger sister.  And then I Googled it.  And once I figured out what I had been handed was more than a little intimidated.

I downloaded as many photos of Rebel Wilson as I could find and wondered all day what I was going to do.  That night I watched the movie with my friend Cathy and found some kind of affection for pieces of the story and the characters, and with that tenuous interest developed I stumbled on an idea and ran with it.

The biggest problem was that I didn't have any photos of Rebel Wilson in the pose that I needed - and even if I did, I'm not sure what would and would not be considered plagiarism in using a photo of someone as inspiration for a final painting.  I've also never done any kind of caricature (not that this was going to be one) or even tried to create a drawing of someone without good reference for what I was doing.  But I ended up finding two photos with the same-ish lighting that were kind of what I was looking for and I did a sketch or two to see if I could combine them into what I was looking for. 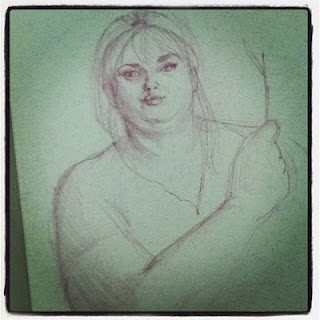 A week is not a long time to throw something together, so there was no time for second guessing.  It was close enough.  Combined with a photo I took of myself in the pose I wanted, I think I managed pretty well. 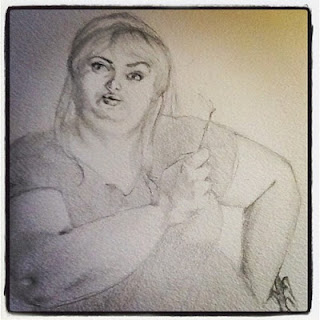 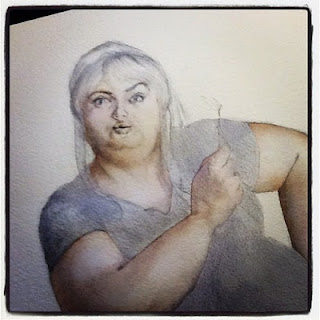 I ended up doing the whole thing in watercolor and colored pencil - no acrylic under-layer   I missed that piece of it, I think, and I will keep doing the under-layer in acrylic.  I'm not quite sure what the difference was, just that I didn't feel that the watercolor was going down the same way. 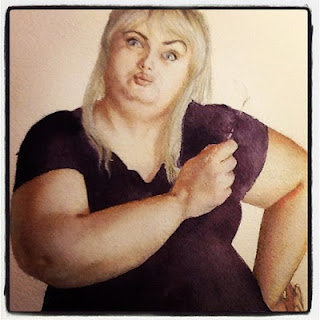 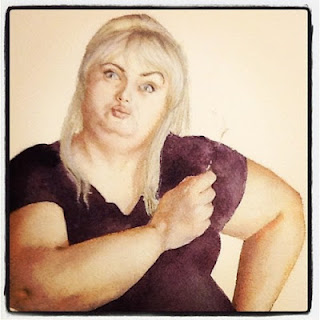 So then I scanned it in and did some editing and created the background in Photoshop.  You can see the final piece here, along with the sketch I did for Sound of Music.
Posted by Unknown at 9:00 AM