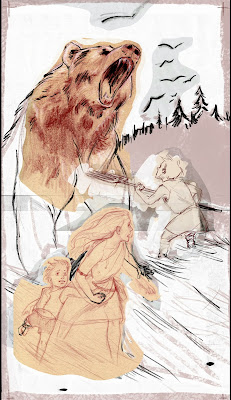 So, that piece I posted way back in, what was it?  June?  Yeah.  I have been working on it.  So.  It's going to be the first piece in my black and white portion of my portfolio.  This is obviously just the final drawing.  I am putting it on the board today.  Cross your fingers!

I got some pieces of inspiration from SFAL2 back in May.  I jotted then all down in my sketchbook to review later, but 'Bear Attack' jumped out when I asked myself what was an experience I knew about.

It's kinda hard to say how these experiences kind of merged in my head - but they did, and I had all the pieces before I could really trace them back to their source.  So . . .

For those of you who know or have gone back through my blog posts, you know that I spent some time in Alaska at the end of my junior year in college working on my thesis.  It's kinda a long story, but what you need to know is that the school gave me money to go up to Alaska for several months and I ended up getting on board with someone who did outreaches and ended up traveling all over the state, helping out and taking pictures and drawing and painting.  Anyway, I was up there during the summer for part of that when the salmon were running (as in going upstream lay their eggs).  We went fishing or hiking (when we had time, which wasn't often), and one day near the end of our trip, we ended up in the area around where the Russian Kenai Rivers join up.  We had been there all summer, seen almost every kind of wildlife there was to see: moose, caribou, eagles, etc.  You name it, we had seen it.  Except for bears.  And it was salmon season, so that was a little odd.  We had heard the bears were out, we had even been witness to some of the damage they can cause by breaking into storage sheds and garages to get into meat freezers.  But I hadn't seen one.

So we hit the woods, hiking down to the river and the first thing we hear from people hiking up is that there are bears everywhere. And there were.  Like three.  Two huge grizzly cubs and a mother black bear.  None of them were as big as the bear in this piece, obviously, cause this is fantasy, but we had an experience or two that day that I will never forget.

The other piece of this little story is kind of about one of my brothers, Mark.  He's married and off doing army stuff - and that was always one of those things that everyone knew was going to happen because my brother is a warrior through and through.  He's always been that way.  Anyway . . .

When we were little, we would go up to Tennessee a lot; my parents had bought a cabin up there that we rent out and homeschoolers that we were, we would drive up there and stay for months at a time, fixing up the house, pulling weeds, cutting firewood, etc.  Sometimes I think that homeschooling is just and excuse for parents to have ready access to child labor anytime and anywhere - which is why I have every intention of homeschooling my kids whenever I have any.  Anyway . . .

We had two dogs at this point, a golden retriever and a beagle, and even though they had free reign to go off and run all over the mountain, we still occasionally took them on walks (I'm not sure why either).  Which is what we were doing when some giant monstrosity of a dog runs up completely out of the blue and attacks our golden retriever.  Now, all six of us are freaking out - my mom, my two younger brothers and two younger sisters (one of whom was like, three).  One of my sisters is crying, youngest brother is crying, Mom had picked up my littlest sister and is shouting trying to get the owner to come and take care of their dog, I'm trying to keep the beagle out of the fight, and Mark is just mad.  He jumps onto the back of this huge dog (that's bigger than he is, cause he's, like, eight) and starts beating it's back with his fists shouting "Get off my dog!  Get off my dog!" Which, of course, freaks my mom out even more.  But Mark doesn't care, he wraps his little hands around the other dogs collar and just keeps tugging, trying to pull the dog off our golden.

Anyway, I don't remember how we got that thing off our dog - but I'm pretty sure it just got fed up with the little hellion on it's back.  But that's Mark.  Never met a challenge he couldn't beat; throws himself 100% into whatever he's doing.

So all that to say, these are the two main ideas that came together in this piece.  The little kid with the pitchfork doesn't really know what he's going to do with said pitchfork, but he's not gonna stand there and let the giant demon-bear eat his sister and brother.
Posted by Unknown at 9:46 AM