From the Prayer Room Week 5 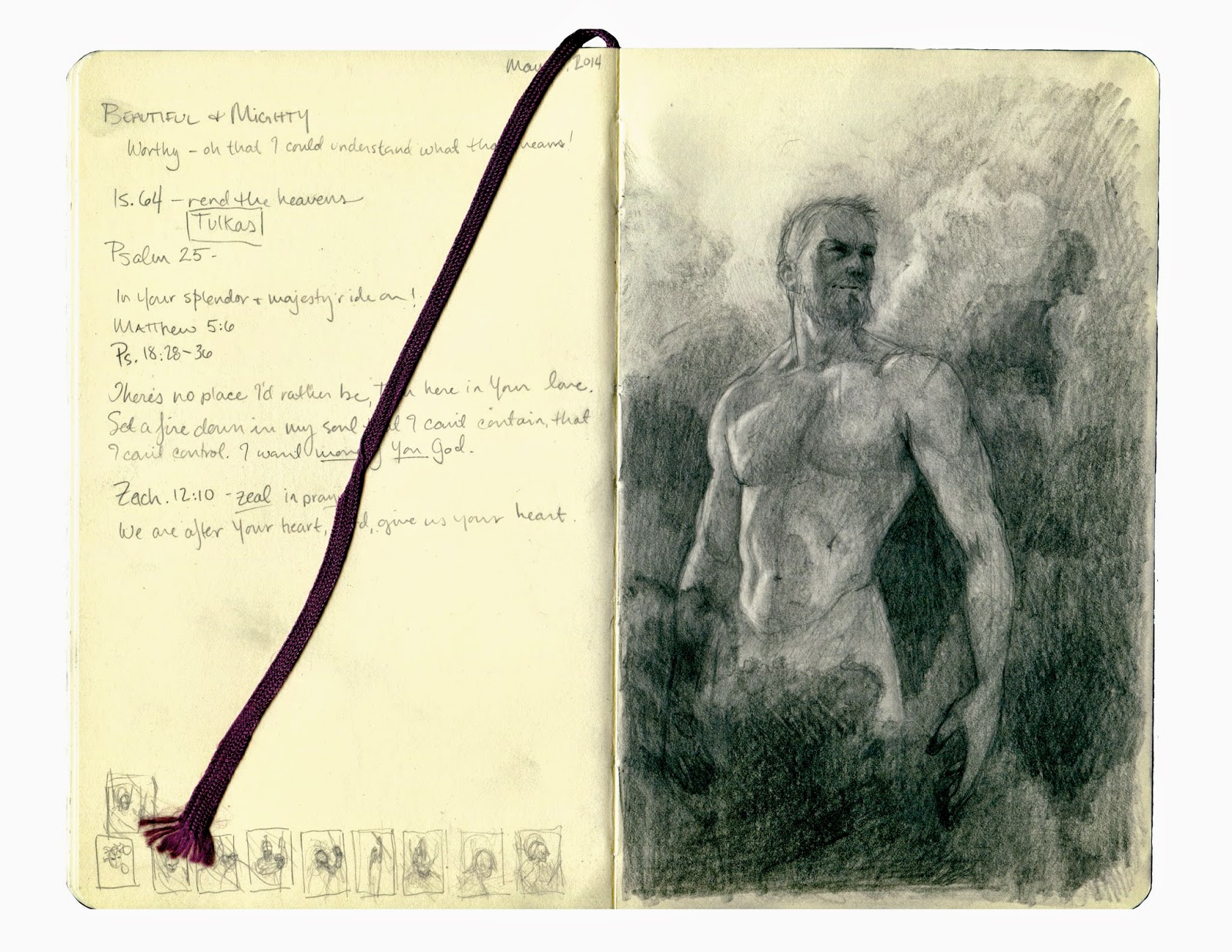 I know, I know, six weeks and I've only gotten one week finished the way I initially proposed.  Sigh.

Things are a little busy here on my end.  I've decided that For the next few weeks, I'm only going to worry about the sketch portion of this project.  I'll finish "Here be Dragons", "Surrender Unto Hope", and week 3 (which I'm going to call "Ruah"), but after those I'm going to pick and choose the ones I end up painting until my schedule settles a bit.  So . . .

For weeks my mind had been turning over the character of Tulkas - one of the Valar from J.R.R. Tolkien's The Silmarillion.  Nienna, Tulkas and Orome are have always been my favorite of the Valar, but the explanation of that would take to long.  Anyway, here's some excerpts from The Silmarillion about Tulkas:

But in the midst of the war a spirit of great strength and hardihood came to the aid of the Valar, hearing in the far heaven that there was a battle in the Little Kingdom; and Arda was filled with the sound of his laughter. So came Tulkas the Strong, whose anger passes like a mighty wind, scattering cloud and darkness before it; and Melkor fled before his wrath and his laughter, and forsook Arda, and there was peace for a long age.  And Tulkas remained and became on of the Valar of the Kindom of Arda; but Melkor brooded in the outer darkness, and his hate was given to Tulkas for ever after."

"Greatest in strength and deeds of prowess is Tulkas, who is surnamed Astaldo, the Valiant.  He came last to Arda, to aid the Valar in the first battles with Melkor.  He delights in wrestling and in contests of strength; and he rides no steed, for he can outrun all things that go on feet, and he is tireless.  His hair and beard are golden, and his flesh ruddy; his weapons are his hands.  He has little heed for either past or the future, and is of no avail as a counsellor, but is a hardy friend . . . Tulkas laughs ever, in sport or in war, and even in the face of Melkor he laughed in battles before the Elves were born."

So I started trying to draw Tulkas - or the aspect of God that Tulkas embodies: a storm of righteous anger that casts down evil to make way for joy.  So I'm calling this week's sketch "Tulkas Astaldo".

I had this epic idea of what Tulkas would look like - helmet, armor, the works.  A mighty, big picture with a man like figure clothed in everything strong and imposing!

And it wouldn't work.

I nearly shredded the page drawing and redrawing the sketch.

So I went back to Tolkien to reread everything and found myself caught on this concept of Tulkas as a wrestler.  My two brothers wrestled in high school, so I know a few paltry facts about the sport, and I knew that helmet I kept trying to draw would get in the way of any wrestling.  The armor, too. So I went back to the drawing board (so to speak) and tried to put my human imagining aside in favor of the work.  And then, as if by magic, I found the sketch.  Go figure.  Goes to show that simpler is better sometimes.

Initially, I wasn't sure that I liked the final product - there was a lot of struggle even after I found the sketch.  But I think it's growing on me.
Posted by Unknown at 9:30 AM