Notes About "The Wild Hunt" - Part I, The Three Dogs

Almost every year my church here in Houston has a kind of week long art camp.  Kids who have finished Kindergarten through fifth grade come in everyday and do dance, art, music and drama workshops.  It's high stress (for the adults), super crazy and fun and crazy fun (for the kids and the adults).  About a month ago, some of the people on the planning committee asked if I was interested in painting something over the course of the week in front of the camp kids.  The idea being that the kids would get to see the painting change and grow over the week.

Some of the issues when painting in front of kids are 1) the piece needed to be a size that won't be hidden in front of me as I paint, 2) action oriented, and 3) that it calls for a level of detail that would capture the imagination and interest of the littlest ones.  I spent the two weeks before camp rushing around getting reference and wondering if I was capable of finishing a 20 x 24 inch painting in four days (flash forward to the present: I didn't).


Thank you to Mandy, Eliana, Tahlia, Lindsay, Jason, Sarah, Storm, Katherine, and Emmet for being so flexible and letting me come over last minute and take reference photos! 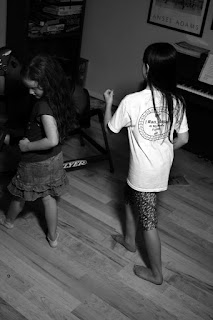 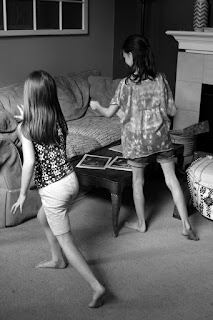 The piece grew out of a concept I've been exploring for a couple of years now.  I'm calling it "The Wild Hunt" (yes, it is a very loose reference to Norse mythology) and I've got several ideas and characters that are going to feature in the series of pieces I eventually create.  I felt there were correlations between my concept of "the Wild Hunt" and the camp's theme of "magnificent adventure".  Which means it was more like, "Quick! There's an idea! Grab it and RUN, I mean, DRAW SOMETHING!!"

Over the next week or two, I'll be doing a series of posts that focus on some of the elements, or characters in the painting.

Some of these characters are in the painting intentionally; they had meaning and purpose beyond looking right in the space.   Some are there because they felt right, or represent things that are important to me.  And then there are a few I added because I needed a shape to fill that space.  But whether or not I intended for all of the pieces of this painting to have meaning, they ended up taking on a life of their own.  The more I thought about the piece and prepared before the camp, the more meaning I saw in all the different characters. 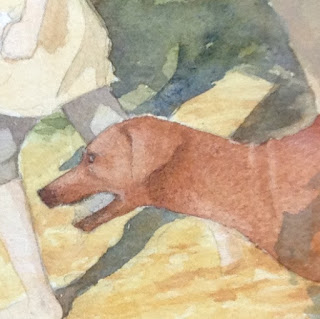 I felt like there should be dogs in the painting; I love dogs.  Once I knew I was doing a painting of a whole host of kids and animals running through a forest, I planned on fitting in a dog somewhere. They feature in more of my work than I'm always aware of.  They weren't the first thing I added, but they were close.  These three are a breed I have never actually interacted with: I'm just in love with the idea of these dogs.  Rhodesian Ridgebacks are the Navy Seals of dogs.  It's true, there's a Dogs 101 clip on YouTube that says so, so it's obviously a real thing.  They're very courageous, strong, tough dogs.  And they look so freaking cool. 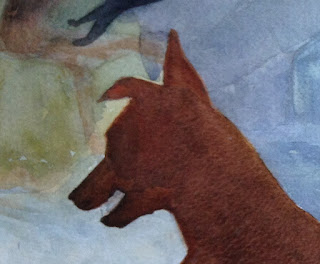 I hope you are get the idea: I really like these dogs.  I love the way they move, I love how strong they look, I love their color and I love their history. Get this - they were originally bred to hunt lions. They were trained to track down the lion and then keep it at bay until the hunter could come up and make the kill. I know I might have just lost a few of you.  I can hear your protests: "But Sara, you can't put Aslan-hunters in a painting for a church camp!!"

Hang in there if you can.  I'm going somewhere with this. 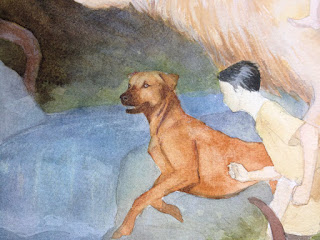 After I decided to put these dogs in the painting, I started fixating on this story from Genesis in the Old Testament about a man named Jacob, who was one of Isaac's sons.  For those of you who go to church or maybe grew up in Sunday school, you might have heard of this story, but for those who might not  . . .  Here's a recap.

Jacob's the guy who tricked his older (twin) brother out of his inheritance and then tricked his dad into giving him the eldest son blessing (which was a big deal).  Ran away, fell in love with a girl, worked for her father for seven years so he could marry her, was tricked into marrying her sister and then had to work another seven years for the girl he really wanted to marry.  It's a long story, you can look it up if you want (starts around Genesis 25:19).  After a while (and for a multitude of reasons), Jacob decides to pack up his (now very large) family and move back home.  Where his brother still lives. His older brother, who could be (justifiably) still angry with Jacob.  And in Genesis 32:22, Jacob goes off on his own one night, worried about his upcoming meeting with his brother, Esau.  He ends up wrestling with a man, who turns out to be God, all night long.  And God changes Jacob's name to Israel (always pay attention when God changes someones name in the Bible) "for you have striven with God and with men, and have prevailed." (Gen. 32:28, ESV).

So every time I think about these dogs, I think of this story.  Jacob wrestling with God, not letting God go.  And I start to see the correlation between these dogs, and I start seeing them as almost as a representation of a people who are trained to hunt the Lion, to pursue Him without fear, without rest.  Which led me to Isaiah 62:6-7:


On your walls, O Jerusalem, I have set watchmen; all the day and all the night they shall never be silent. You who put the Lord in remembrance, take no rest,  and give Him no rest until He establishes Jerusalem and makes it a praise in the earth.

That word "watchmen" then made me think about the other part of the R.R.'s purpose: to guard the family home.  A guard dog's purpose is to always alert and aware of what's going on around them.

Part of what I wanted to give the kids with this painting was a visual representation or reminder of what I knew they were going to be learning about all week in camp.  It was exciting and humbling to find this piece with the R.R. had meaning and purpose beyond my conscious intention.  This was another piece of what God was speaking over them.  Some of you may not understand, that's okay.

It's really intimidating putting all this out there; I don't usually want to tell everyone the meaning an "story" behind the pictures I create.  And I don't know if I have better words to explain all of what I felt I wanted to give to the kids in this piece.  Maybe I'll get better at this as these post get written.