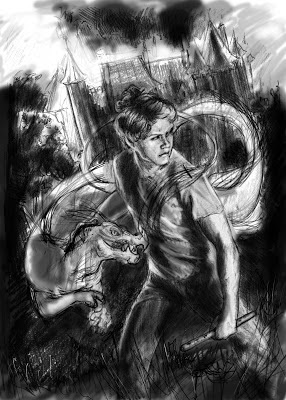 This is a rough summary of the story that was inspired by the Dragon Tamer piece.  I debated for a while even putting up this much, but I wanted people to have an idea of what was going on.

I hope this gives you a good idea of what I was thinking when I thought of this piece.  There may or may not be a book in the works, and I reserve the right to take everything back to the drawing board.  I'd love to hear what you think, so please feel free to leave a comment.


Once upon a time, but not very long ago, there lived a boy named Gabriel Predergast. He lived somewhere between this world and Fairie, so as you can imagine, some wonderful and fantastic things have happened to him. But it wasn’t always like that. For a long time - 17 years in fact - nothing amazing had happened to Gabriel except that he was the one wizard in a family of wizards who couldn’t do magic. Magic never did what he wanted it to do. He was very good at building things, however. But in a world where magic is the rule rather than the exception, “handmade” is rather less than ordinary. For years he despaired of ever doing anything important or great or even interesting until one day his family went to a party.

Gabriel and his whole family were invited - his father and mother, his seven older brothers and three younger sisters (who were all fantastic wizards, which made Gabriel’s failed attempts look even worse). Now, lots of things happened at this party – most important being that there was a real, honest to goodness dragon in a cage. A dragon that Gabriel and Jason, one of his older brothers, stole.

It was, of course, Jason’s idea, but he ended up dragging Gabriel into his hair-brained scheme (it happened a lot). Through a series of events too complicated to get into now, they ended up sneaking the dragon out that very night and no one was the wiser. Gabriel and Jason managed to ‘borrow’ their father’s car, stuff themselves and the dragon inside and drive out past the city limits. It’s a good thing it was late and there was no one on the road; neither of them had a license and Jason had never managed to pass any of his multiple driving courses. They stopped at the first secluded spot they found and let the dragon out of the car with firm notice that it was to ‘go back to its home’ and, this from Gabriel who was a little bit smarter than his brother as you might have guessed, that it wasn’t under any circumstance to follow them home. But you never know with dragons what they understand and what they don’t. Or at the very least what they choose to listen to.

Gabriel and his brother made it back to the party in one piece - sans dragon.  What is more important is that their father’s car made it back in one piece, which could be considered a minor miracle. Everything went according to plan - at least until the morning.

The dragon took a liking to Gabriel and ended up following them home.  You can imagine the chaos that ensued as Gabriel and his brother tried to hide the dragon from the rest of their family – but no matter how they pleaded threatened or cajoled, the dragon would not leave.

They hid it in the basement. No one went down there much and they might have hidden it pretty well, if the dragon could have been persuaded to stay there. Jason’s skills were sorely put to the test finding and fixing the myriad of things the dragon broke on its wanderings through the house. He didn’t find all of them in time either - Mrs. Predergast’s china and china cabinet fought the dragon and were cast down rather spectacularly. And loudly. Gabriel ended up shouldering the blame for that - even though Jason fixed everything ‘good as new’ for his mother - and was grounded for a week. By this time, the “theft” of the dragon was headline news and Mr. Prendergast was heavily involved in the investigation casting more than one suspicious glance at his sons. To Gabriel’s credit, he thought all eight of his sons were in some way responsible, and by the end of two weeks, all eleven of his children knew and were actively involved in trying to keep the dragon hidden. The triplets of course were first, being the most in the house, but the other six boys weren’t far behind.

Now, the really remarkable thing was that the dragon – the wild, untamable, fire-breathing dragon – followed Gabriel around like a puppy (or at least it tried).  Both brothers were at a loss to understand what was going on, until Jason came across an old book on dragons. It talked about a very rare kind of person that dragons were attracted to - any dragon, whether it be old or young, from near or far, ferocious or gentle, would be docile and calm and good natured when confronted by a dragon tamer.

Gabriel had lived all his life without magic, without anything that really set him apart from the rest of his siblings, or even brought him up to their level. But being a dragon tamer didn’t sound like all that great a consolation prize. What good is it to be able to charm dragons with your mere presence in a world where dragons were all but extinct? And that didn’t help them with their immediate problem which was that they couldn’t get the thing to leave. He didn’t care about the dragon, he didn’t care about being a dragon tamer – he just wanted the dragon gone.
Unfortunately the dragon belonged to a very powerful wizard who wasn’t about to sit back and just let a bunch of kids steal his dragon. Obviously.

Now a lot of other things happen before Gabriel gets to the  point you see developing in the illustration above.  One important thing is that Jason and Gabriel find a flute that allows a dragon tamer to control a dragon.  More things get stolen, feelings are hurt, the dragon gets kidnapped and in the process of rescuing him (and with no small degree of anger) Gabriel ends up doing a lot of stupid things - including setting a house on fire.  But while things don't end perfectly  lessons are learned and Gabriel takes a step towards understanding and accepting himself for who he is and who he is not.

I will update this again when things are a little more settled story-wise.