On the off chance that this might be useful to someone, or for myself to look back on later: here is how "Drogo" came to life.

Anytime I try and do something in art that I haven't done before, I look to the masters.  Fortunately there are several Dragon Masters and they all tend to congregate over at Muddy Colors blog.  What's even more helpful is when all said Dragon Masters congregate to talk dragons over a two week period - which they did last September.  And piz-de-resistance: Justin Gerard's fantastic post on filling the storehouses in your brain with reference info from real life which you can read here, as well as some other tips on using real life to inspire fantastic illustrations here.

So I pulled up a whole mess of reference and dived in - and almost immediately got lost.

But I discovered two very important things: one being that I don't like drawing reptiles.  At all.  And two, Gerard knows his business and should always be heeded lest brain sucking aliens who feed on the unwary and under-researched find you and . . . well, eat your brains.

What I'm trying to say is that despite my distaste for two-dimensional reptile reproduction, I learned a lot.  And I know my dragons are better for it. 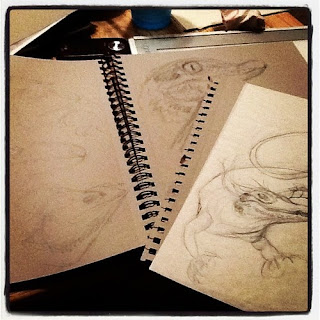 I sat myself down and drew a bunch of lizards and crocodiles and eels.  That was more frustrating than I anticipated and might have added to my general dislike of the species.  I leaned a bit too heavily on my reference and the first few came out too . . . crocodile-ish. 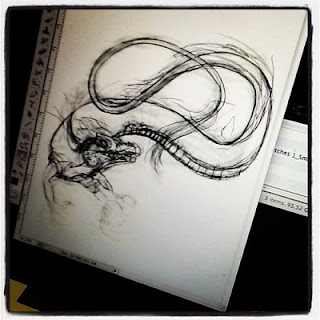 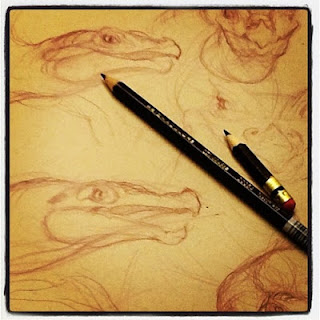 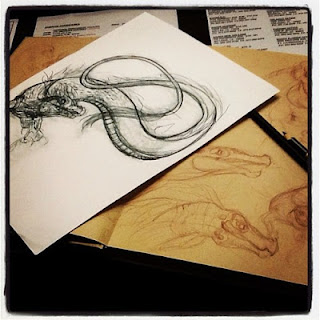 I kept at it, hated everything, and finally just put all the reference away, listening to Gerard's advice despite my doubts of being able to pull something like this off without guidelines.  Then I put in too much turtle - which was odd because I hadn't been looking at any turtle reference.  Then because owls are always on the brain, they decided to jump in at one point and I had to call everyone to order.  But by then, my youngest sister had tossed in some seahorses and that yanked all of us down a completely new path.  Out of nowhere, some real horses joined up with a komodo dragon or two and by that point I really had no idea where we were going and was just along for the ride. 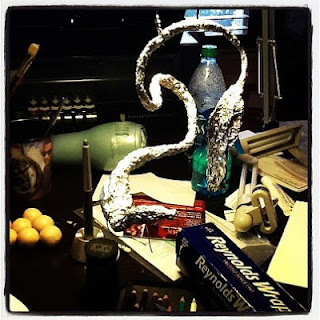 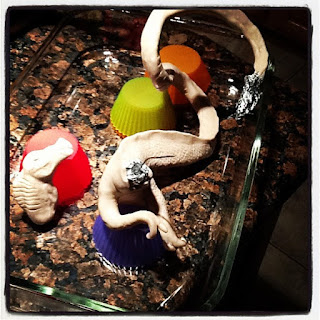 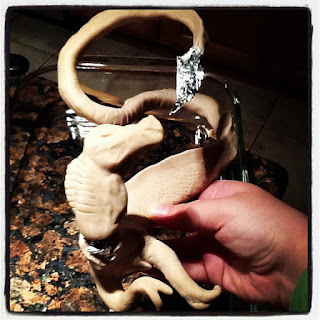 After I had the rough idea of what to sculpt (the word sculpt being used here in a very general rough vague sort of way) I attempted several times to start . . . and restart.  And restart.  Then I brought out the tin foil and everything started working a little better.  A not to those who are masochistic enough to try this in the future: armatures make Sculpey much more bearable.  And usable.

I did the head separate because it was a nightmare trying to shape it while it was on the body.  And it kept coming out looking like the lizard from Rescuers Down Under.  No joke.

Finally I cooked the darn thing and hung it up between two chairs to photograph. 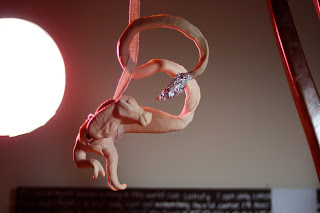 The problem that I ran into after that is I tend to lean too heavily on my reference and the lack of detail 1. was making my drawing look half-assed and 2. was good because it made me see that about myself.

So.  A general outline of how I made the little dragon guy.  Hopefully some pitfalls identified to avoid in the future.