The Art of My Youth

I am going to share a piece of my childhood with you.  I'll put together some lists of different things I remember influencing me growing up.  I figure I'll do a kind of series - mostly for myself; I think it's always a good idea to know and understand where you come from.  Not that any real understanding can come from this other than that I'm OCD. 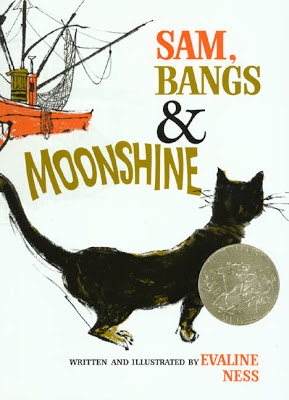 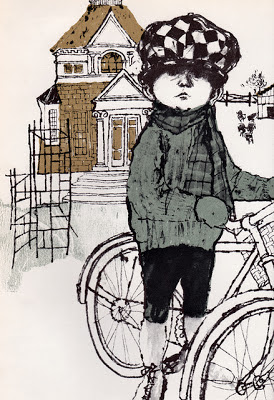 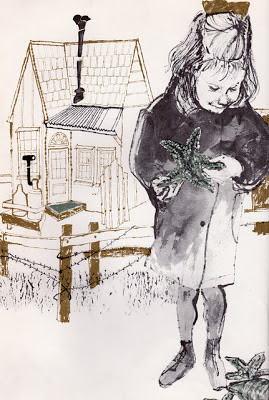 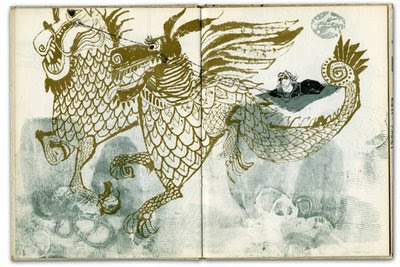 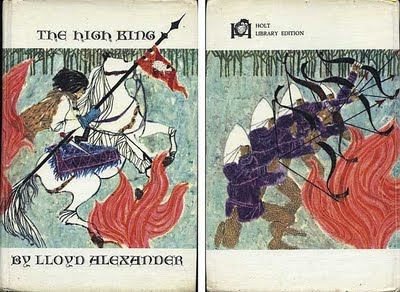 Sam, Bangs and Moonshine was the first children's book that I fell in love with as a child.  I couldn't tell you what it was that captured my imagination so completely, but I have vivid memories of this book, of pouring over it for hours.  I know that at least half of it was the story itself, but the pictures . . . It was in the bag that I packed and left just under the foot of my bed in case there was a fire.  All of my favorite things in the world were in that bag.  If there was a fire in the night, all I had to do was grab that bag and everything would be alright.

She's the reason I picked up Llyod Alexander's Chronicles of Prydain - her covers are what drew me to the books (I wasn't smart enough to realize that it was from the same artist).

I still have a copy of this on my bookshelf and I still take it down periodically to read it and look over the illustrations. 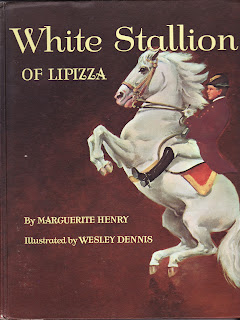 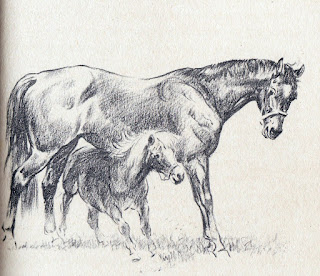 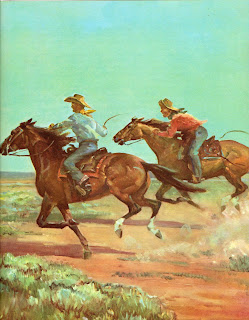 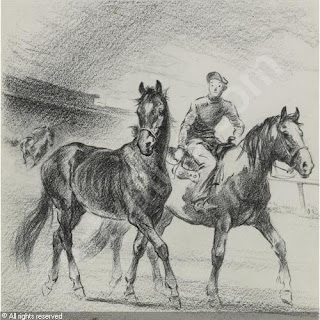 I have a confession to make.  I was one of those girls growing up; one of those girls absolutely in love with horses.  And that phase lasted a lot longer for me than for others (to be really honest, it still pops up every now and again . . . or maybe more than that).  And Wesley Dennis fed that obsession.  A lot.

To be fair Marguerite Henry has to take her fair share of the blame.  I think King of the Wind was my favorite book for a couple of years - until my dad started reading the Hobbit, Lord of the Rings, and Chronicles of Narnia to us.  But I think Wesley Dennis was the only illustrator that they used for her books, so.

He and Holland C. Holland are mainly responsible for my love affair with pencil and charcoal.  I allowed other artists to lead me away from my love of the drawing once I was in college, but I think it's making a resurgence. 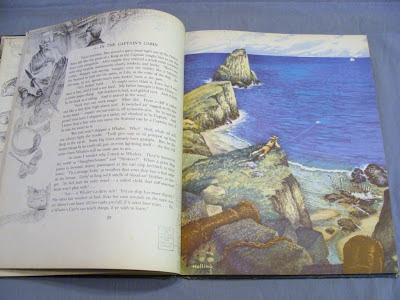 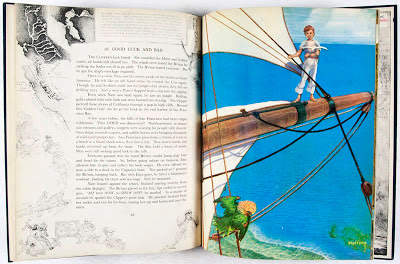 I was never impressed with his watercolors, but oh, I was having conniptions over his drawings when I was in middle-school.  And the adventures that happened in his books - oh my gosh! 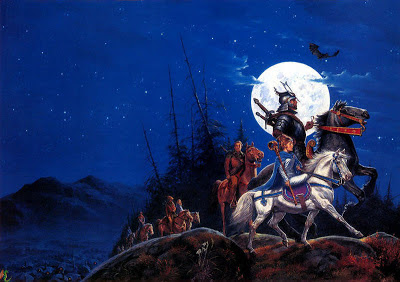 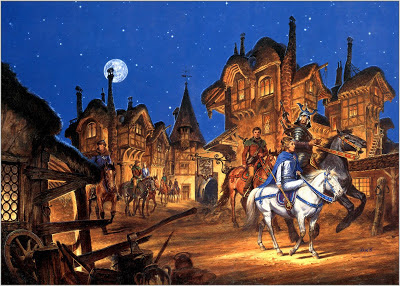 I'm gonna be honest, my dad and I enjoy making fun of this guy.  I know he's dead.  I know it's not very nice, but really his draughtsmanship . . .

I want you to understand - this is a post about art that influenced me growing up, not about my favorite artists, even though some of them have made it in here.  I do not like Sweet's paintings.  I'm not sorry about that - even though the guy's a beast with his paints.

But, I remember my dad reading the Wheel of Time series as I was growing up and I remember this cover.  Dad would leave his books around the house as he was reading them and this illustration was captivating; I would stare at it for the longest time.  This cover is what made me want to read the book.  I couldn't wait until my dad told me I was old enough to read the series - because of this cover. 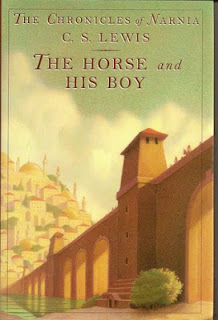 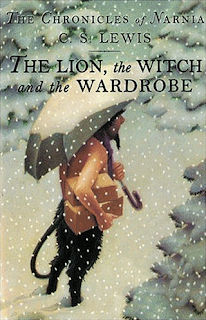 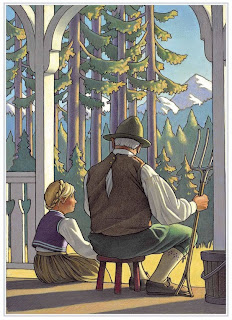 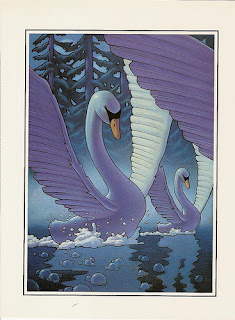 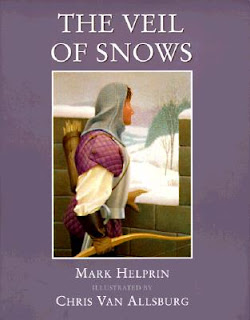 It wasn't until college that I figured out that the covers of my favorite edition of The Chronicles of Narnia and the illustrator of Mark Helprin's trilogy retelling of Swan Lake were one and the same.

Mark Helprin I discovered in a bookshop in College Station, I think.  I picked up the second two books - not realizing that there was a prequel - I finally tracked it down in college, much to my satisfaction.  Sometimes a series just . . . moves me . . . in a way I don't understand.  Diana Wynne Jones and Madeline l'Engle (to some extent: for me she bridges the gap between these two artists and Lewis and Tolkien ) are other authors that do that for me.  They're different from Lewis and Tolkien - their work is . . . I don't know.  I don't want to sound corny but it speaks to the deepest parts of me.  Jones and Helprin . . . reading their work makes me think of what it must feel like to sit and listen to an oracle.  I can't explain it better.  Their books are otherworldly to me.  Anyway, this series was one of those.  And when it was combined with Chris' illustrations - oh, my gosh!

Those covers for Narnia where nothing short of magical.  He is the main reason that I have such a hard time thinking of illustrating these books myself, because they are just so perfect.  And then there's Pauline Banes . . . yeah, I just give up. 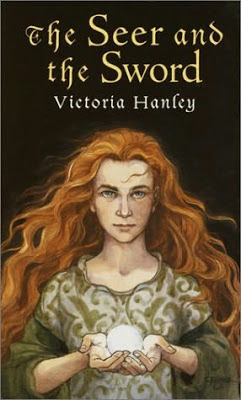 This was another book I picked up as a kid on the force of the cover alone.  I thought the story was good, but man, I carried this book around for weeks and just stared at the cover in my free time.  I loved her hair, I loved her hands . . . My mom, who was always a big proponent of learning through reading, got Hyman's illustrated version of Chaucer's Canterbury Tales.  I forget what we were studying - medieval literature? But I remember reading every story (they're abridged, edited by Barbara Cohen, so it was much easier for a middle-schooler to read, and less my mom had to worry about me reading something not age appropriate, which was always a concern because I was (am) a rather avaricious reader.  After the first few times I came to my mom with questions about things no 8 year-old should know about she made that rule I mentioned above about asking permission before reading a book) and just staring at the pictures.  My favorite was the Franklin's Tale, maybe partially because it had my favorite painting.  But only partially.


Anyway, I think that's enough for now.  This doesn't cover the multitude of other books I read growing up.  I had a ton of animal information books and books without pictures - I got into those at a very young age and always mourned their lack of illustrations - books about pioneers, castles, period cooking, Native Americans, dogs, horses, China, etc.  My mom keeps trying to get rid of some portion of the books we read  - trying to clean house, I guess. But every time I sit down to fill a box for her I'm always coming across an old friend . . . And what kind of person would I be if I just got rid of it like that?