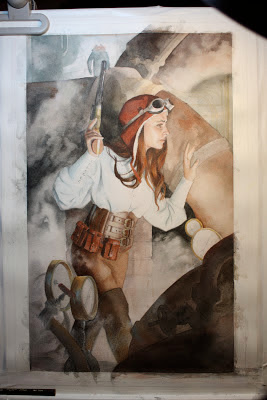 I just want you to know that I'm not trying to make this painting a bigger deal than it is.  First of all, I'm not all that creative when it comes to blog post titles.  So.  Second, I'm also not trying to be all "look at me, look at me!" even though I know it looks like it.  I am always so curious about how other artists work and the whole process and time and all that stuff.  There's a part of me that wants to show others who may be wondering how that painting came together.  Maybe you'll get some insight or avoid some of the traps that I tend to fall into. And it's good for me to be able to look at my own process and see how my decision making process works.  So I might be a little over-zealous in the sharing department.  But you know what?  This is my blog.  You can deal with it!

I'm sorry, it's late and my brain is fried.  So now that I've got my little disclaimer out there, here's some more updates, and an actual scan!  Aren't y'all proud of me?  I am. 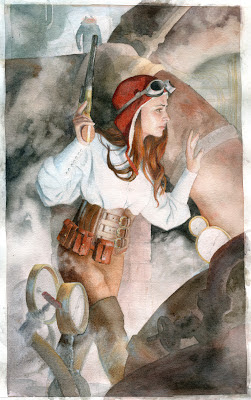 So my new-ish scanner is 9x12 I think.  I've got it in my studio now and it helps to not have to walk all the way across the house to set up a scan, then back to my studio to preview and then back again, etc, etc.  I know.  My life is so hard.  This was scanned in in 4 part and stitched together in Photoshop.  I played with the levels a bit, but I think most of the color was captured pretty well.  It picked up a lot of the paper texture though and that wasn't as cool. 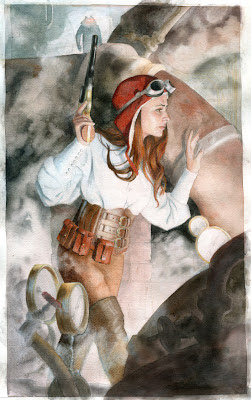 I was a little lost with the piece, so I went in with Photoshop and did a paint-over, to see if the changes I was wanting to make would work for the piece.  It did, so then I did that in real life.  My dad came in as I was working on it - he's one of the reasons I pursued art growing up.  That and my mom says she doesn't think I could do anything else.  Anything not creative, I mean.  She doesn't mean it as mean as that sounded, but I can't think of another way to put it right now.  Anyway, Dad came in and called me on my laziness in forgetting/ not wanting to go in and define some detail in her pants the way I was with the rest of her outfit.  So I got down and dirty with my reference and nailed down some details in the pants and WOW, how that helped.  It's so subtle, but it really brought the piece up a notch.

Anyway.  I didn't scan it again.  You'll just have to make do with photos until it's really finished.  Cause aside from the general annoyance that scanning is, un-taping a stretched piece of watercolor paper to scan it and then trying to tape it back down was probably the blondest thing I've done all week.  Maybe all year.  So guess what?  It's staying on the board until Sara's done with it. 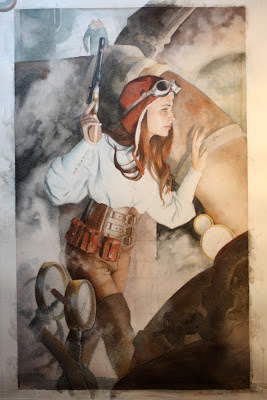