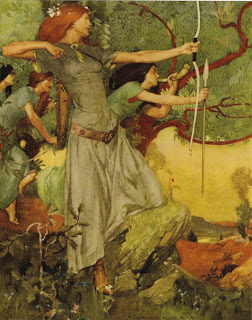 I saw this the other day on Tor.com.  I'd never heard of William Russell Flint, but I have now!  I am over whelmed by the awesome.  Check out more of his work here, as well as a small bio.

This is an excerpt of Le Morte d'Arthur which the above is an illustration from.  It make the picture 1000 times more awesome.

So Sir Launcelot and Sir Lavaine departed, that no
creature wist where he was become, but the noble men of
his blood.  And when he was come to the hermitage, wit
ye well he had good cheer.  And so daily Sir Launcelot
would go to a well fast by the hermitage, and there he
would lie down, and see the well spring and burble, and
sometime he slept there.  So at that time there was a lady
dwelt in that forest, and she was a great huntress, and
daily she used to hunt, and ever she bare her bow with
her; and no men went never with her, but always women,
and they were shooters, and could well kill a deer, both at
the stalk and at the trest; and they daily bare bows and
arrows, horns and wood-knives, and many good dogs they
had, both for the string and for a bait.  So it happed this
lady the huntress had abated her dog for the bow at a
barren hind, and so this barren hind took the flight over
hedges and woods.  And ever this lady and part of her
women costed the hind, and checked it by the noise of
the hounds, to have met with the hind at some water;
and so it happed, the hind came to the well whereas Sir
Launcelot was sleeping and slumbering.  And so when
the hind came to the well, for heat she went to soil, and
there she lay a great while; and the dog came after, and
umbecast about, for she had lost the very perfect feute of
the hind.  Right so came that lady the huntress, that
knew by the dog that she had, that the hind was at the
soil in that well; and there she came stiffly and found the
hind, and she put a broad arrow in her bow, and shot at
the hind, and over-shot the hind; and so by misfortunethe arrow smote Sir Launcelot in the thick of the buttock,over the barbs.  When Sir Launcelot felt himself so hurt,he hurled up woodly, and saw the lady that had smittenhim.  And when he saw she was a woman, he said thus:Lady or damosel, what that thou be, in an evil time bearye a bow; the devil made you a shooter.

In other words:  Huntress shoots Lancelot with an arrow.  In the behind.  And he is pissed.